I spent Saturday at my friend Drew's place playing 40k. We went to the Bugeater GT together back in June. He has a nicely painted Imperial Guard army, so I was looking forward to a cinematic game. I rolled high for first turn, but gave it up thinking it would be better if my dakkajet came in after his vendetta. We rolled hammer and anvil, so we were on the short table edges. The mission was to retrieve a relic from the center of the board.

The guard had two bane wolves, two chimeras and a Leman Russ in an armored column in the center of the board. 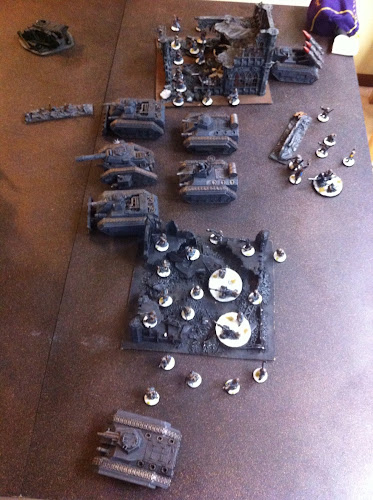 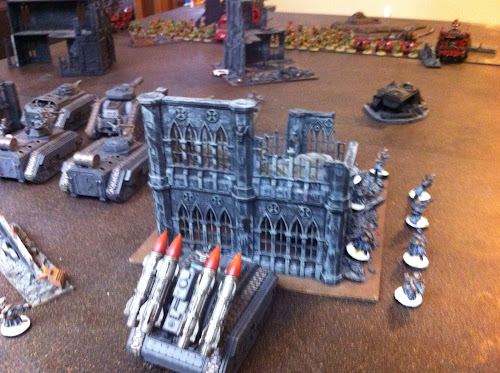 I plunked two huge boys mobs against the front edge of the deployment zone in order to rush the objective. Mrganobs and he boss were in the armored trukk on the left flank aimed at speeding into the backfield to crump guardsmen. I deployed a trukkboyz mob was deployed on the right flank to push the center. Lootas set up in the multistory ruin to the rear. Kannons and shokk attack gun were deployed on the left as well. 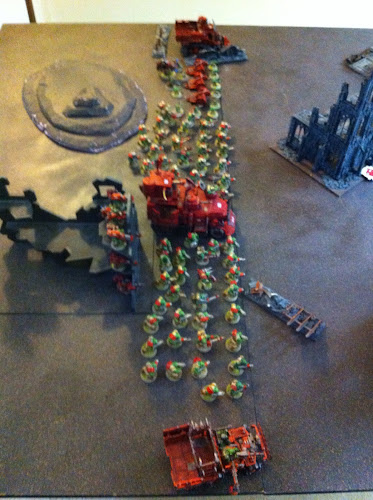 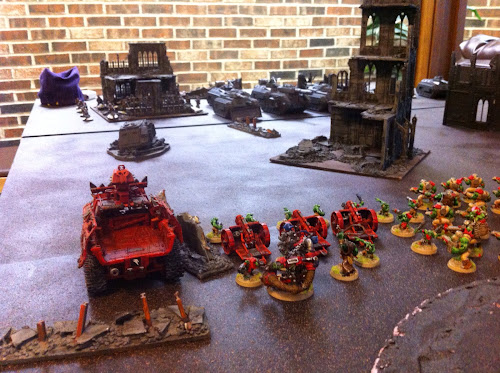 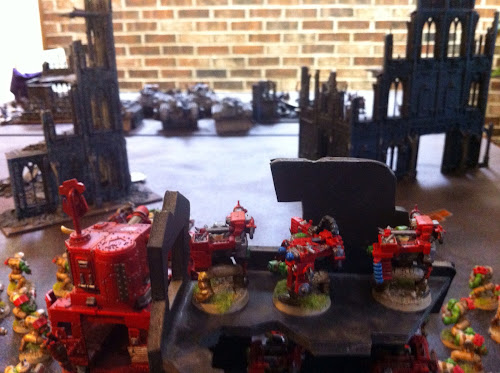 The first turn, the guard bane wolves rush the center and are promptly dispatched by trukkboyz on the right and meganobz on the left. Guard shooting is largely ineffectual in the first turn, but 20+ boys die in second turn a combination of indirect fire from the rear and the Russ pressing the center. 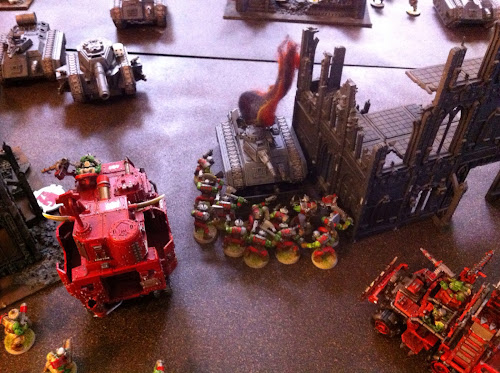 The meganobz rampage on the left continues. After flaming and pinching their way through a guard squad in the ruin, they worked their way toward the vehicle that has been tearing bloody chunks from the boys squads. 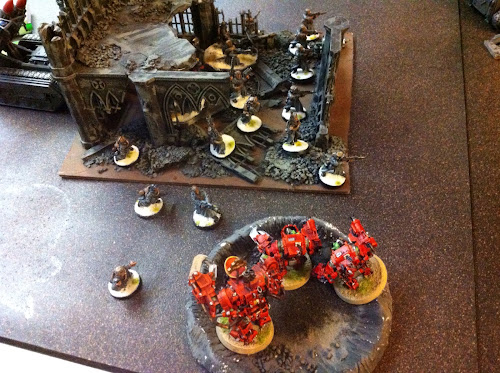 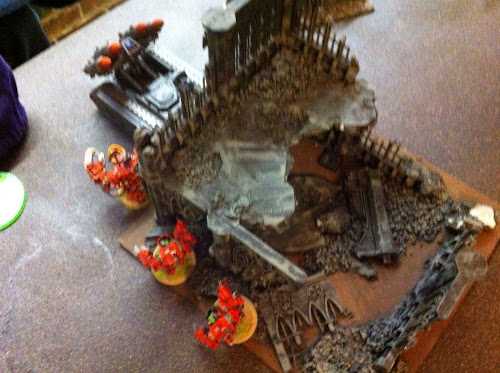 The dakkajet finally arrives and promptly destroys oe if the Chimeras in he center. 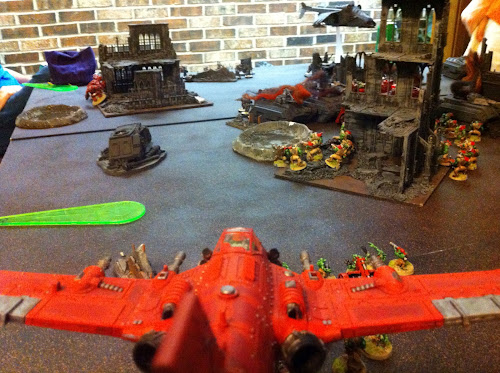 Then the vendetta sees it, with predictable results... 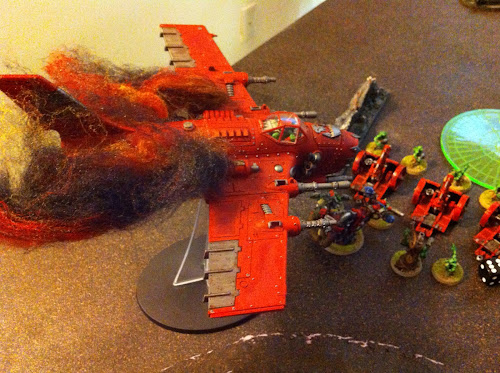 In the center, the damaged battewgon hits the gas and rams the remaining chimera. 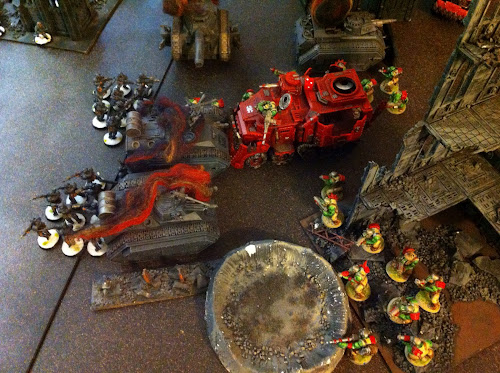 The deffkoptas scream in and destroy the Russ with four rokkit hits to the rear armor, then get blown out f the sky by whithering guard fire. 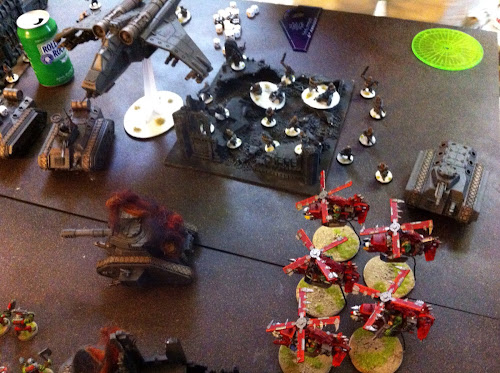 The lootas take aim and avenge my dakkajet by bringing down the vendetta in one lucky turn of shooting. 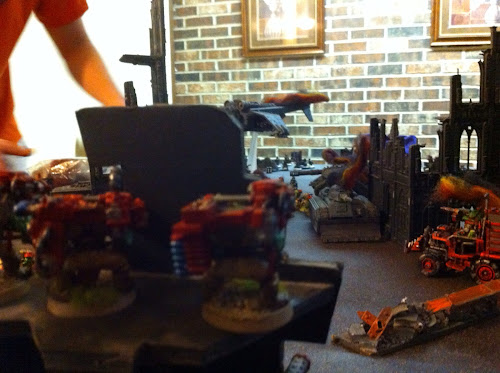 I've got the relic! 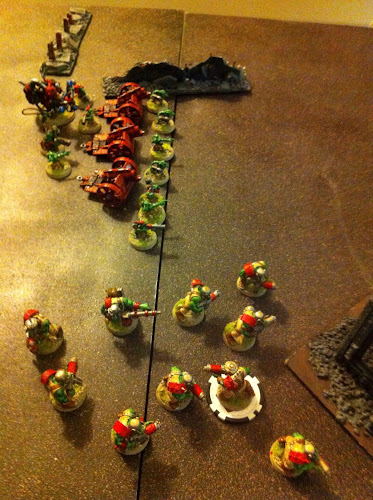 The command chimera guns the engines through a ruin in order to head off the remains of my boys mob and prevent them from holding the relic... but, the chimera fails its difficult terrain test and gets stuck in the ruins. Orks win! 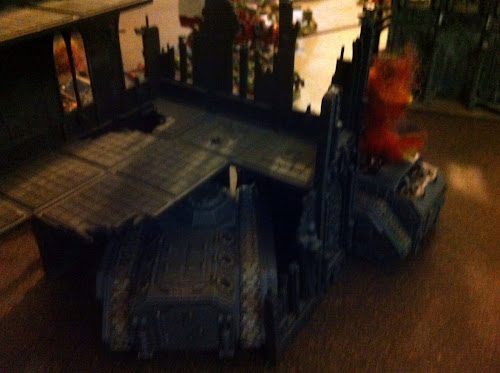 This was a really fun game. We both had grievous casualties. I had ten shoota boys left at the end of the game out of the sixty I started it with. They never even had a chance to shoot! The board was littered with wrecked vehicles brom both sides. The only vehicle still running at the end if he game was a trukk I brought on from reserve in turn five. The win comes with an asterisk as we learned too late that I shouldn't have been able to run with the relic in hand.

Posted with Blogsy
Posted by Galen at 7:51 AM