These are pictures of my Ork army for Warhammer 40000. I've fielded this army in several competitions in the Kansas City metro area. I don't make any claim to being any kind of painting expert, but I feel like I can knock out a reasonably good tabletop standard when I put my mind to it. 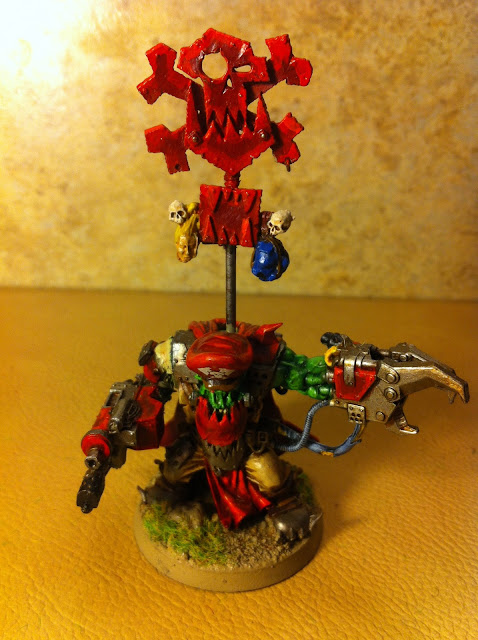 I converted my warboss from the Black reach set. 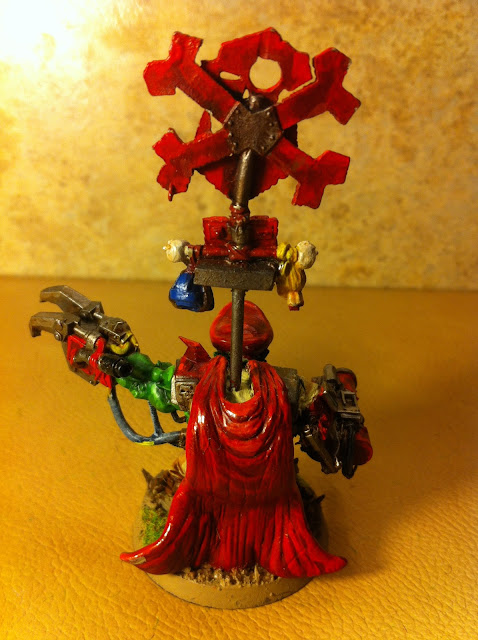 Here is the greenstuff cape detail. It looks a little shiny in this picture. 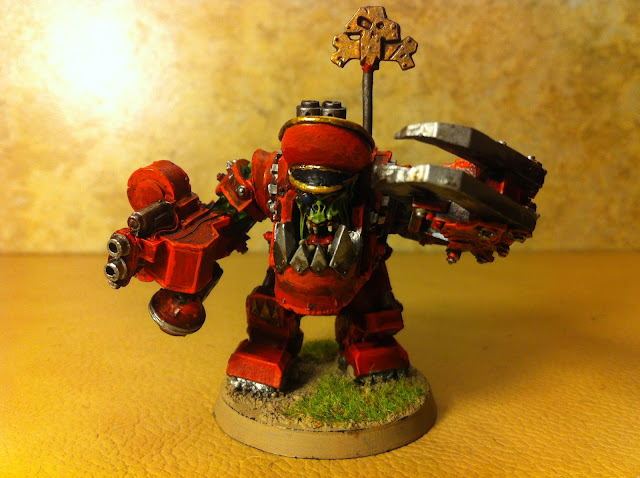 This is my converted Magaboss/Ghaz. The hat is greenstuff and I added a bosspole and exhausts on top. 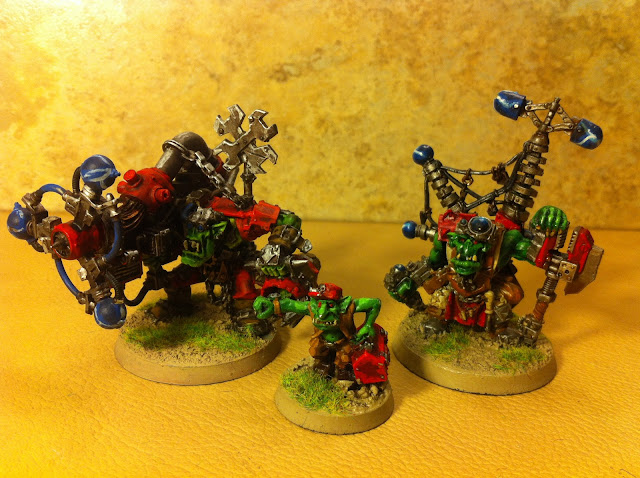 Here are my meks. One with Shokk Attack gun and one with Kustom Forcefield. 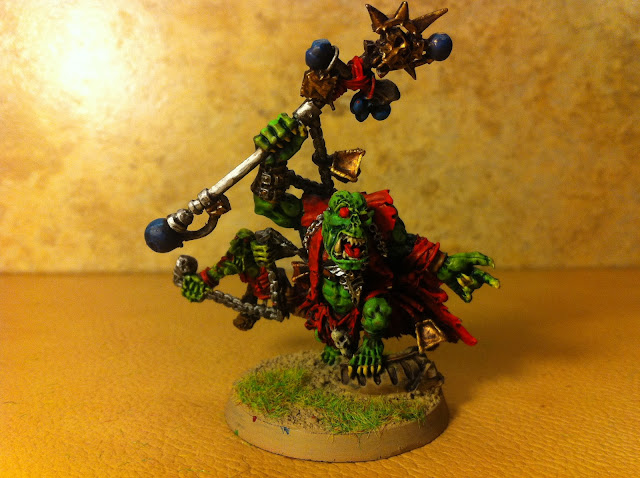 I've only used the Warphead once, but it was a fun model to paint. 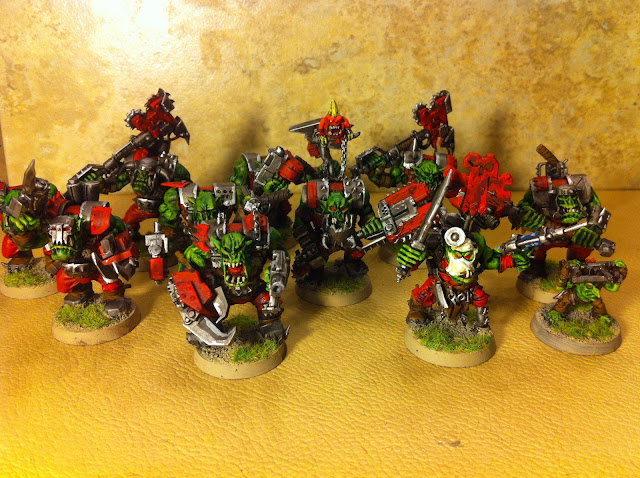 My nobz are a recent addition to my collection. 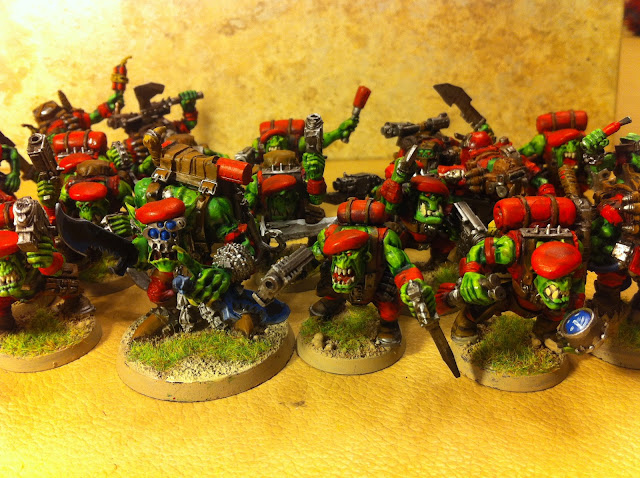 This mob is the pride of my army. I converted my kommandos with greenstuff berets and Kromlech backpacks. I also repositioned choppas to be more stabby. Note the git finda I put on the rightmost boy. 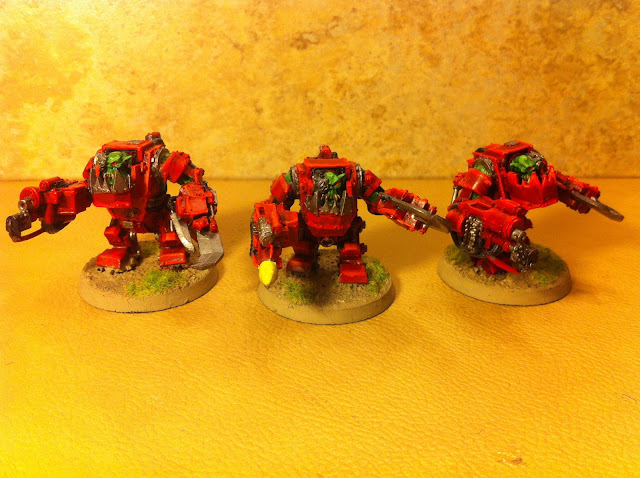 I like to field meganobz in almost every list. I just acquired three more to bulk out this mob. Those combi skorchas have been invaluable. 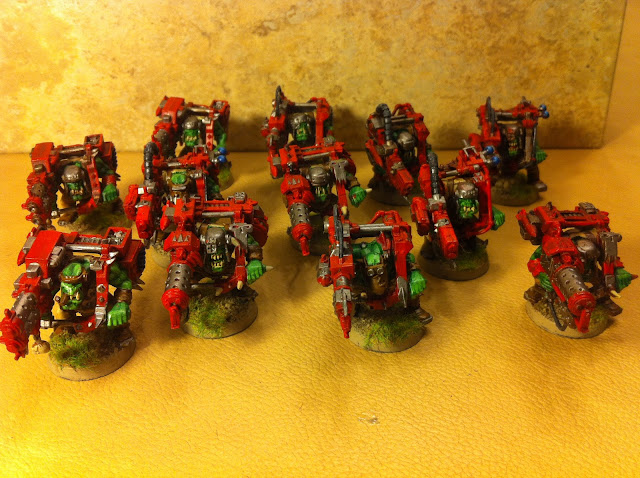 I don't field lootas as much as some ork players I know. They just don't seem to work for me. I have been experimenting with taking two minimum sized mobz to see if that helps. 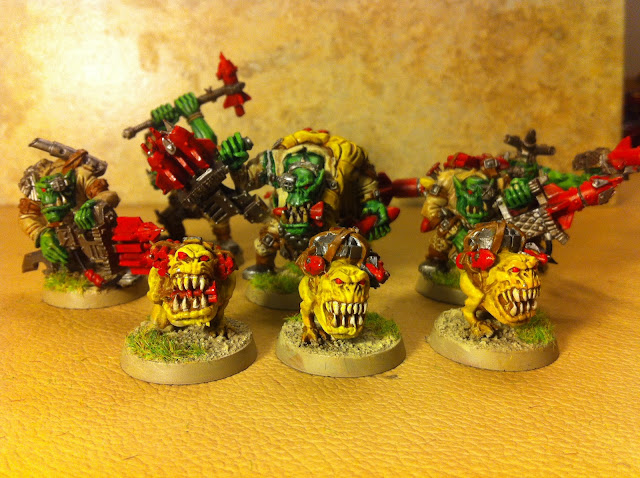 I've fielded these tankbustas a couple of times with varying degrees of success. They see to be a little too unpredictable for competitive play though. 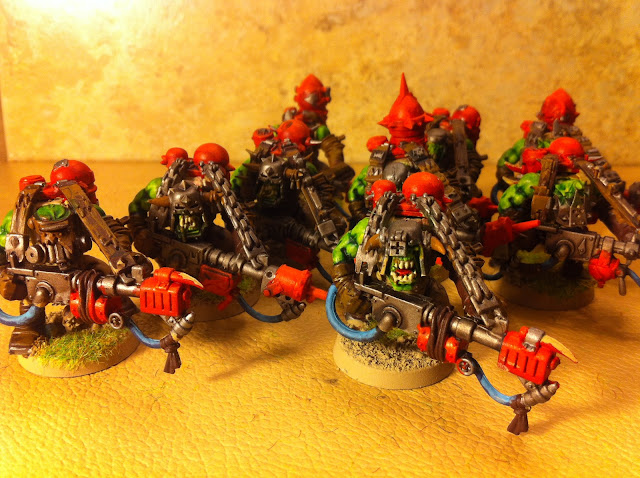 I've tried several times to get burna boyz to work with little success. I do like the models though. 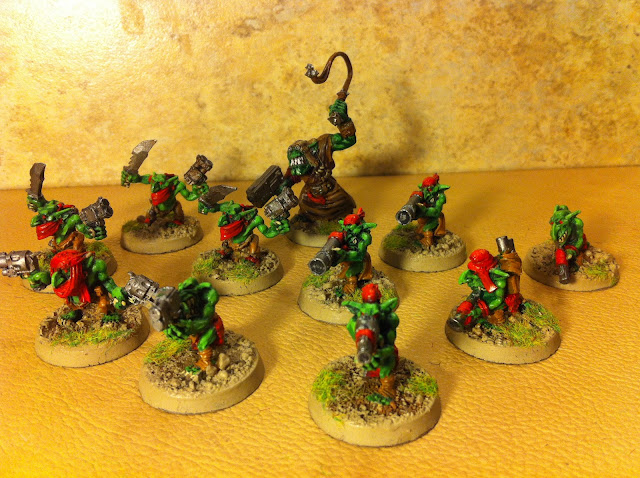 My Grots usually end up in a battlewagon to make it a scoring unit. 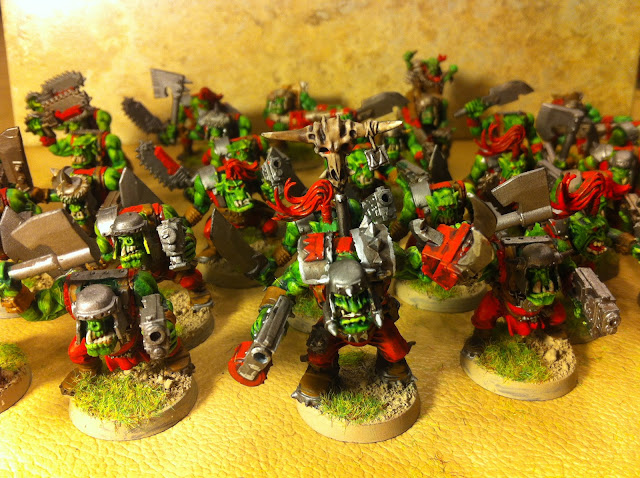 I've got one mob of thirty slugga boyz which typically end up being fielded in trukks. 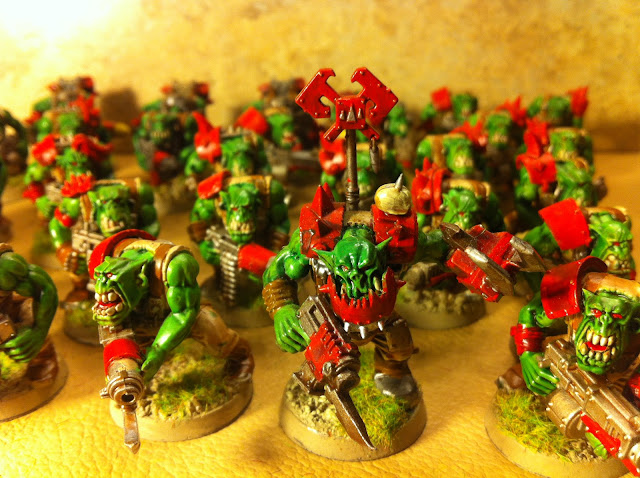 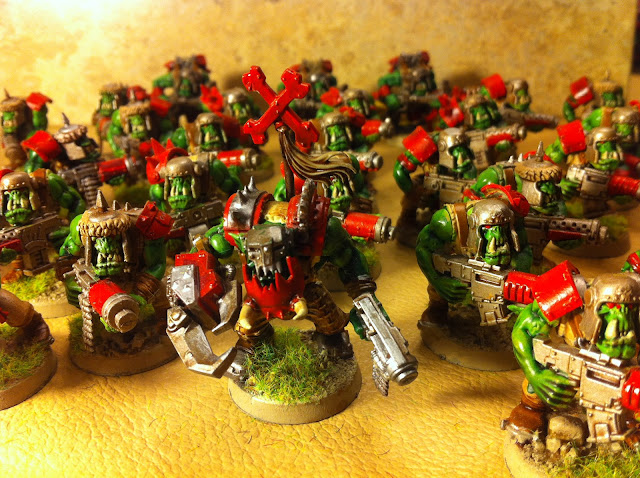 I've got two mobz of thirty shoota boyz to round out my troops. 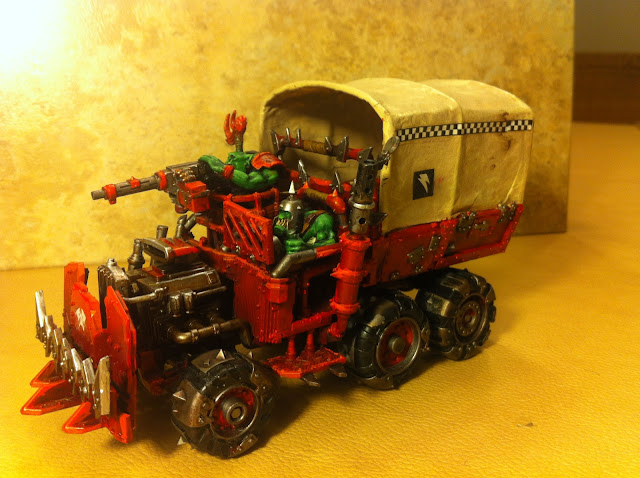 Trukk one has a canvas topper I modelled out of white glue and coffee filters. 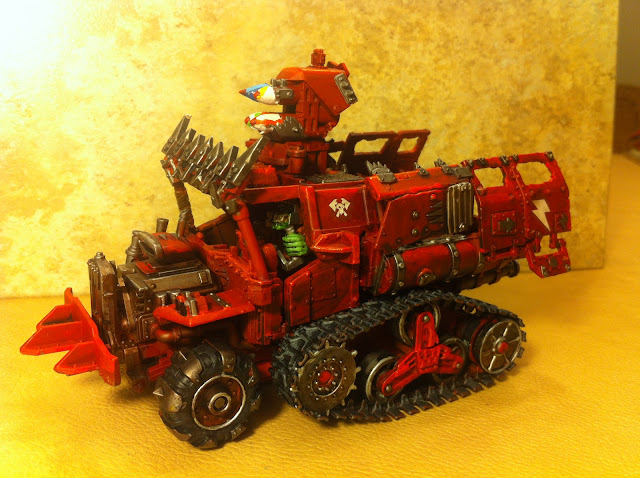 Trukk two has treads that I bashed out of a sherman tank kit. 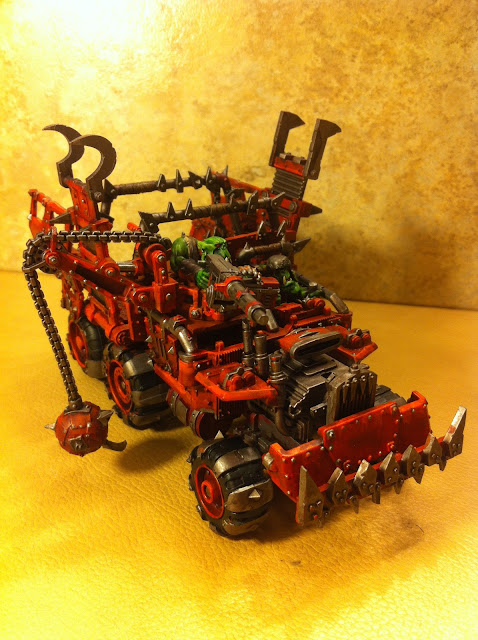 Trukk three is mostly stock with the exception of the third edition parts on the front. 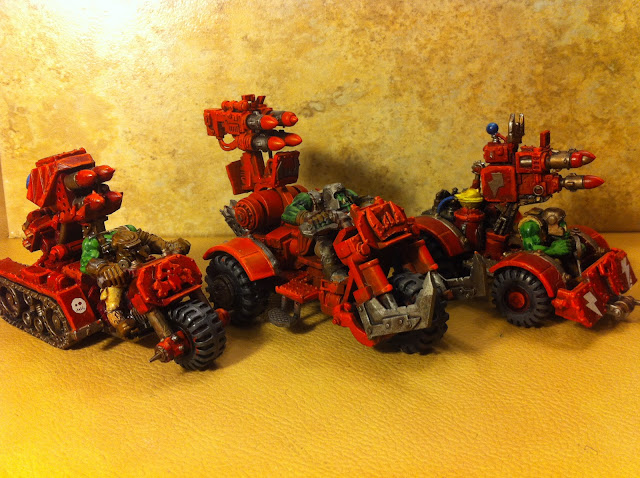 I converted these rokkit buggies with a pile of parts from dreads and koptas. 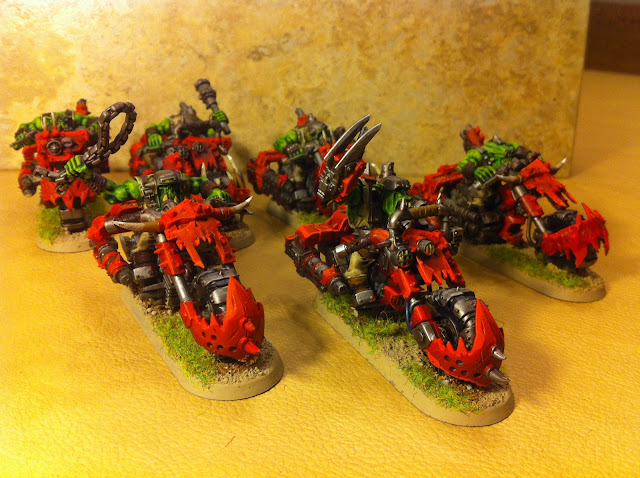 My warbikes rarely make it to the table. I'm still trying to figure out how to use them. 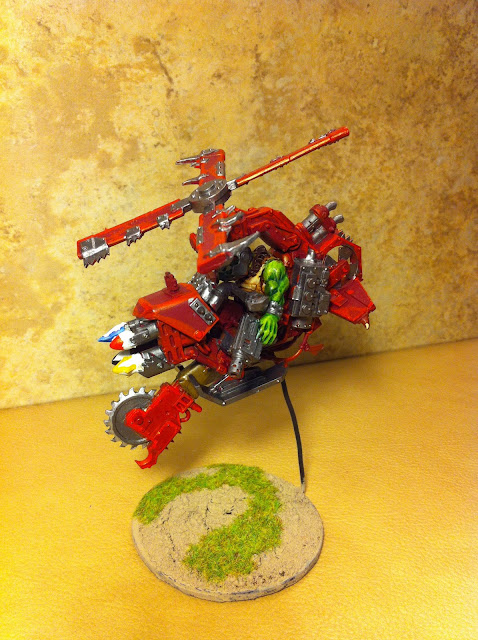 I've painted up five koptas total. Two of them have buzzsaws like this one. 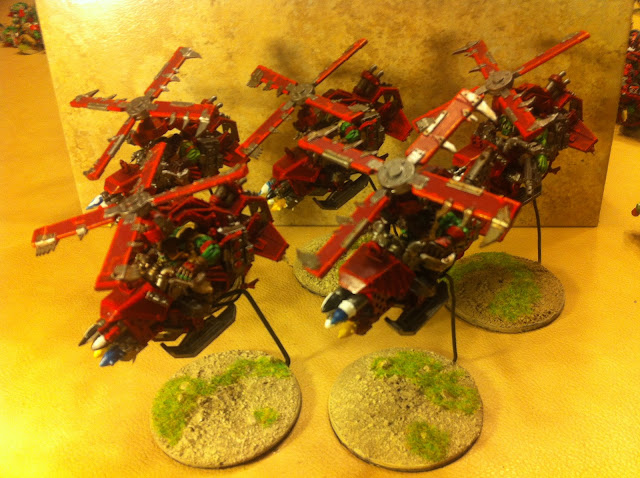 I changed out the GW flight stands with piano wire as I got fed up with the stands snapping of at inconvenient times. 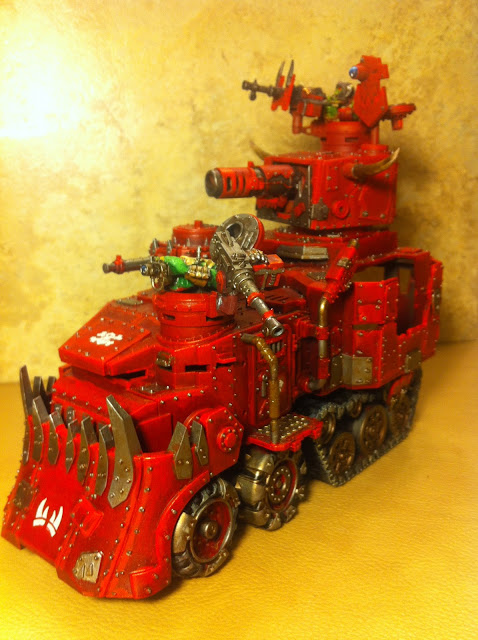 Wagon number one is typically filled with grots and a mek with KFF. I can swap out the turret with another with a normal kannon rather than killkannon. 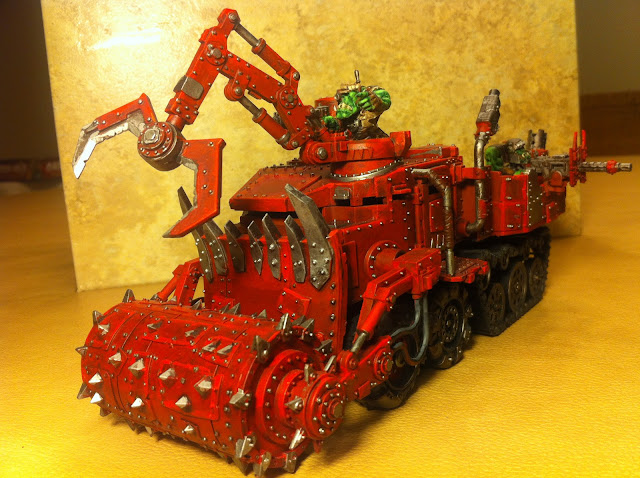 Battlewagon two is my assault wagon. It has a grabbin klaw and deffrolla. 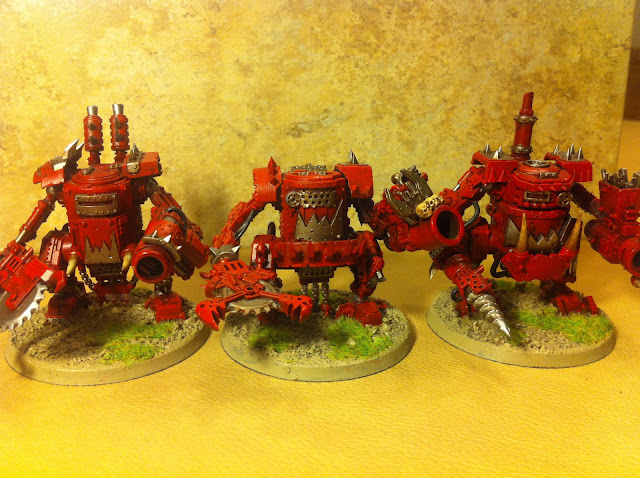 I converted two of the grotzookas out of bitz as each box of kans only comes with one. 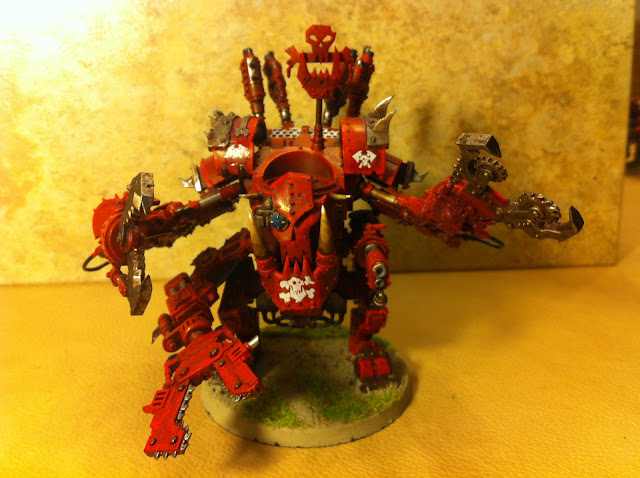 I really like to field my deff dread with skorcha. I prefer to run this guy with grot riggers to keep him mobile. 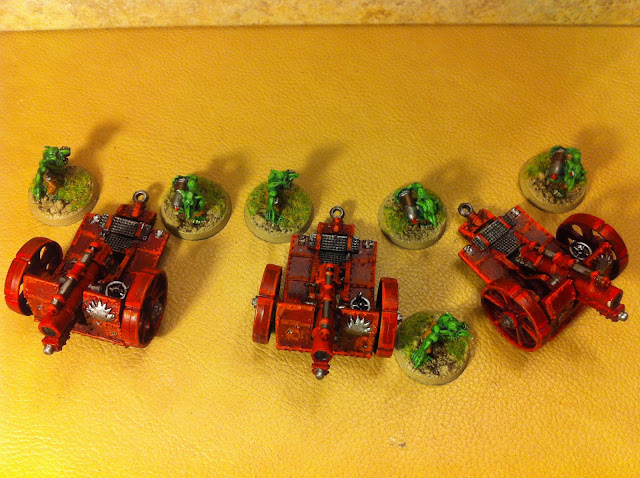 These kannons have saved my bacon on multiple occasions by taking out vendettas and stormravens. 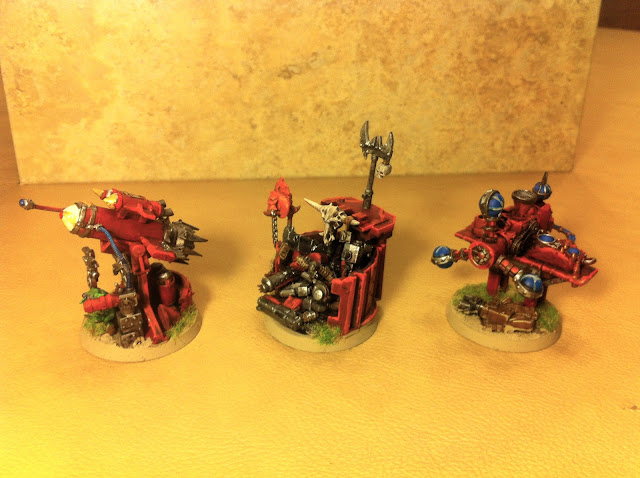 I modelled these to use as objective markers. See if you can tell where all the pieces come from...

That's all folks (until my next trip to the hobby store)...