I just got back from the Bugeater and I wanted to write up a review while the memory is fresh in my mind. I'll break it down here point by point.

Accommodations
We stayed at the West Omaha Hilton Garden Inn, which was the "official" hotel of the event. The room was clean and quiet. The hotel had a couple of patios suitable for cigar smoking, the consumption of adult beverages and unwinding after a long day of tabletop warfare. Although the hotel has a bar, it somewhat inconveniently closes at 10:00 PM. Breakfast at the hotel was about ten dollars. They had the usual hotel fare including made-to-order omelets. The hotel was about four miles from the school where the event took place. It is a straight shot, so it took only a few minutes to make the trip each day.

Venue
We arrived right at 5:00 on friday to check out the venue. The event was held in a large gymnasium at Millard West High School in Omaha. The place was relatively easy to find and parking  close to the entrance was plentiful. Although, I admit to having a couple of awkward moments (flashbacks?) as I strolled in front of the ball team on friday afternoon with my orks on a display board. 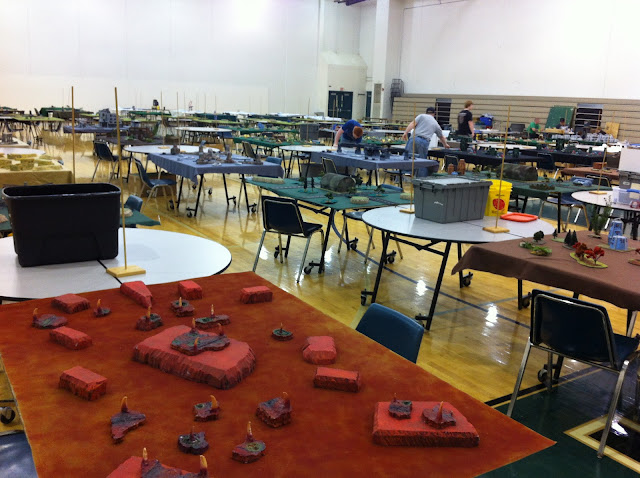 This being my first tournament of this size, I have to hand it to the organizers on the table set up. There were large tables between the game boards for holding display boards, dice, books, etc. Its such a simple thing really, but it made a world of difference in my experience to have a convenient and safe place to put all my stuff while I played. I've been to smaller events where I had to shove my stuff under the table, or balance it precariously on a narrow edge. Additionally, the room was spacious enough to allow plenty of elbow room between tables. You could actually sit down while you opponent was moving without bumping the guy at the table behind you. The tables were clearly marked with tall flags, so it was a simple matter to make my way to my assigned spot at before each round.

As a side note, I thought I was going to have a heart attack when I knocked one of these table flags over and smashed three dark eldar vehicles to pieces before game five. Then I was saved when the Dark Eldar player deftly picked up the pieces of her boats and demonstrated that they were all held together with magnets and no harm had been done. It must have taken until the third turn of my game to recover my composure after that.

Food/Concessions
As this event is a fund raiser for the debate team, they sold concessions in an adjacent gym where tables were set up for eating. I commend the debate team on the service that they provided to the players. They were uniformly courteous and prompt in fulfilling requests for drinks, etc. While not remarkable, the food was acceptable fare (pizza day 1, tacos day 2) for the event and having it on site made it easy for those of us who didn't want to try our luck at speeding around to find a restaurant.

Schedule
Although there were a couple of hiccups, the games were run very close to the published schedule. Delays were short and there was enough padding between rounds to avoid problems with moving people around. Overall, I think they did a great job with keeping the event moving.

Painting and Modelling
The painting standard was well-above average for what I have seen at events I have attended in the past. There were some mind-blowing conversions present at this event. Unfortunately, the pictures I took on my camera phone and posted here don't these armies justice. It was obvious that some people had spent incredible amounts of time preparing elaborate display bases. The artistic talent demonstrated on some of these pieces was simply amazing.

I am only aware of one army that did not appear to be painted and based to the required three-color standard (although I didn't get a particularly close-up look at it, so I may be mistaken). I'm not certain why it was allowed to participate, but given how well-run this tournament was otherwise,  I am inclined to give the tournament organizers the benefit if the doubt and assume that there were extenuating circumstances of which I am unaware.

Games
Friday Evening Combat Patrol -   Although the scenarios were a little rough for some armies, this was primarily intended as a casual affair and I think that it accomplished its mission admirably. I ended up playing two friendly games and meeting some terrific players.

The scenarios for each round were remarkably concise and clear. The mission objectives were unambiguously stated and I didn't hear of any disputes about interpretation, etc. I suppose thats an advantage of a tournament put together by the debate team eh? Battle points were assigned for all three objectives each round (win, loss or tie on each).

All scenarios featured a mix of objectives, kill points and table quarters as primary, secondary and tertiary goals. The published primer packet was a perfect introduction to this style.

Personally, I was thrilled with the opponents I drew. I had six great games this weekend and, as you can see from the pictures I posted, I got to play some extraordinarily well-painted and converted armies.

Conclusion
Overall, I rate this event quite highly and recommend it without reservation to Midwest 40k players who may have difficulty making to one of the bigger events. This was money well spent. I hope to return again next year.

The only suggestion I made on the feedback form was that I would really like to see a narrative, non-competitive event next year. Some of the other major events are making it happen. I know that there are other players like me that would be pleased to plunk down our entry fee to play in such an event.


Thanks go out to all of my awesome opponents (Matt, Zach, Allen, Jacob, Russ and Cliff, Jorge and Alex. I also want to thank the organizers of this event, Tim, his Judges and organizers as well as the debate team. Terrific job guys!

You can check out complete tournament results at the Bugeater GT website: http://gt.bugeatergames.com/