I finally got around to actually playing a game with my Ultramarine army on Monday night.

I've had them painted up for quite some time, but had never fielded them myself.

My opponent in this game was my friend Matt and his Tau.

We rolled the mission and deployment and ended up playing short board edges with a relic objective in the center of the table.

I had second turn this game. The first couple of turns saw the Tau gradually chew up my vehicles, including a storm talon. I was able to drive him off the objective, but by the time I did so, all troops were dead.

The vindicator, the deadnought and the rhinos were all but worthless in this battle. None of them did so much as a single casualty.

My sternguard deployed in a pod on my first turn and took out one unit of broadsides. Then they were whittled down by he enemy force commander and a bunch of fire warrior shooting.

I had a good time playing in spite if the crushing loss I suffered. Knowing neither my army, nor he Tau proved too much of a barrier for me to deliver a competent performance.

At the end of the game. We discussed what I could have done differently.

Here are a few of the conclusions we reached:

1. Prioritize killing the pathfinders and any other unit with marker lights.

2. Add a heavy flamer or two to the sternguard unit.

3. Add a librarian for some psychic powers to complement my army.

4. Taking heavy armor against rail guns is sub optimal. (I can't bear to give up my rhinos though).

I am pleased with the overall performance if the storm talon, even though it died. I expect it will make it into any lust I end up putting together. 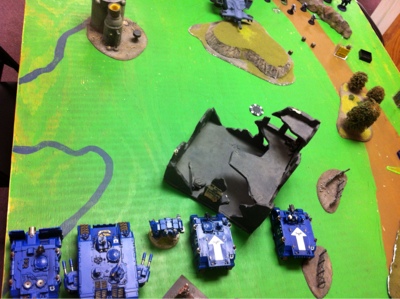 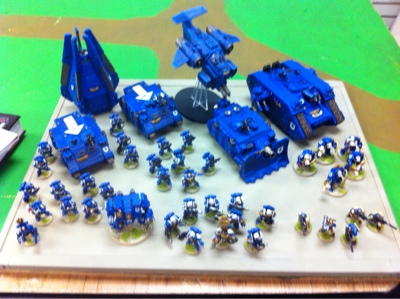 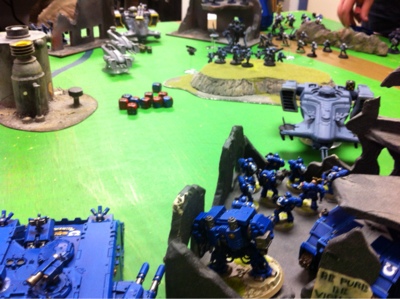 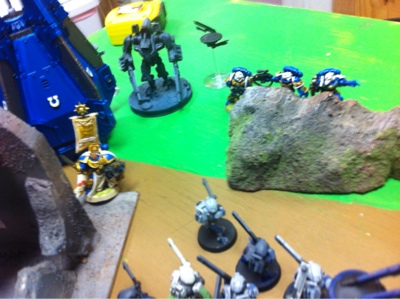 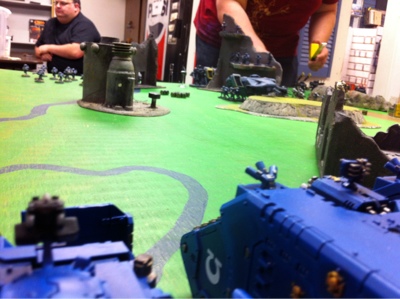 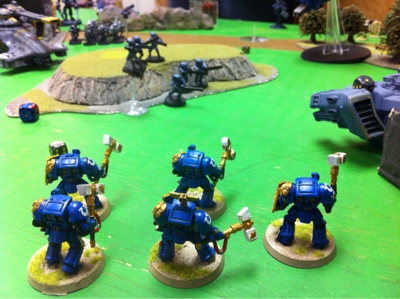 I managed to drop my flyer thus morning, so I am watching the local 40k tourney rather than playing.

This game pits my friend Matt's Tau vs a nicely painted deamon army. 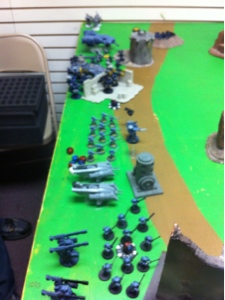 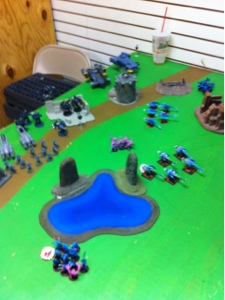 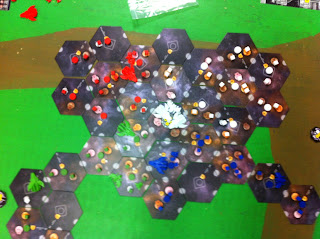 I'm playing a game of Eclipse this evening. I can't say enough good things about this game. It has the epic feel of a twilight imperium with 1/10 of the overhead.
Posted by Galen at 6:39 PM No comments:

So, I finally got around to messing with the scrapped Leman Russ I purchased at the Bugeater GT back in June. The model was a pretty stock Russ.

I pulled off the heavy bolters and replaced them with bis shootas. I took off the front lascannon turret and covered the hole with a leftover piece from the ork flyer kit.

I also used a modified exhaust from that same flyer kit to make it look a bit "souped-up".

I cut and extended the gun barrel and added a jaw from the deff dread kit to the top.

Once I had some glyphs and extra armor plating tacked on, I was ready to prime it.

I'm not sure if I will use this as a true looted wagon, or if I will call it a battlewagon with killcannon. The way I have it armed, it will work either way. 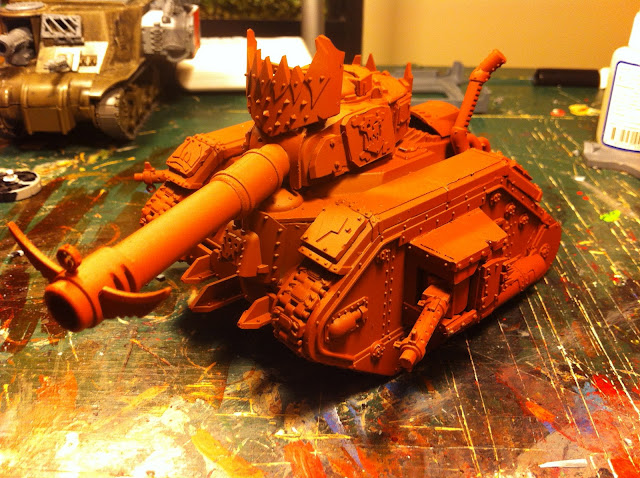 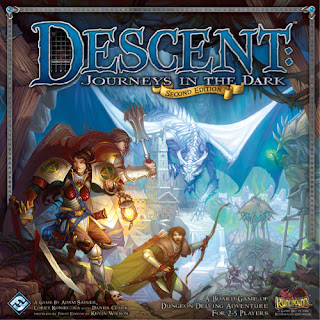 I finally got a chance to try out the new edition of Descent: Journeys in the Dark. I purchased this game when it came out with an eye toward sparking an interest in my wife an daughter. This evening we played our first two games.

As a veteran of the original version including a complete Road to Legend campaign, I was wondering if the streamlining in this edition would be enough to make it suitable for both my rambunctious nine-year-old and the discriminating tastes of my wife.

I am pleased to say that the introductory game went very well. In fact, it played so quickly that we had time to go through a second time. I lost as overlord both times, but I did better the second game.

My daughter seemed to have a ball shooting goblins each turn. My wife gave a good review following our second game. This game looks like a winner and will likely see some table time on family game nights.

I am looking forward to seeing how the experience system works.